The Ethics Lab is committed to creating a universally tailored pedagogy on ethics, one that is specifically sculpted to address the needs of film students, teachers, and scholars. The goal is to make students proud to share this sense of the communal ethical dimension of their being, according to whose world picture we are all similar beings in the sense that we are equally bound to live as decision-making, responsible moral agents. We differ only in our individual desires, goodwill, and capacity to work our ethical muscles in a way that will make us, and those around us, more fulfilled and creative contributors in and to our societies, regardless of our specific cultural environment.

The measurable outcome of this pedagogy—a series of filmed ethical testimonies (evidence)—is to be presented on this CILECT-affiliated website, one that is exclusively dedicated to the study, teaching, and researching of ethics in the context of film, television, and media studies. The Ethics Lab site’s main product is a continuously growing online archive of ethical video testimonies given by film students, teachers, and researchers from around the world. The site also presents a comprehensive, annotated guidebook to the pedagogy of “The Five Guiding Ethical Stars System,” including an extensive list of recommended readings on a wide range of ethical perspectives. The site features a series of video tutorials designed to help teachers around the world to engage in and refine the method of collecting ethical evidence. The site also hosts—and hopes to become a home for—a growing number of lectures on ethics, thereby operating as a forum for conversation and a hub for nurturing the spread of ethics in the greater community. The site is also home to the “Ethics in the Community” project (see separate tab).

In the broadest sense, the causa final of this distinctive pedagogy and research approach is to yield a global collection of testimonies that together create a one-of-a-kind universal site of ethical references in filmmaking culture and beyond, with a mind to develop and enrich our conversation on ethics. Toward this goal, we believe that a rich perspective on—and deep conversation about—our ethical condition is both an essential tool and an end in itself. 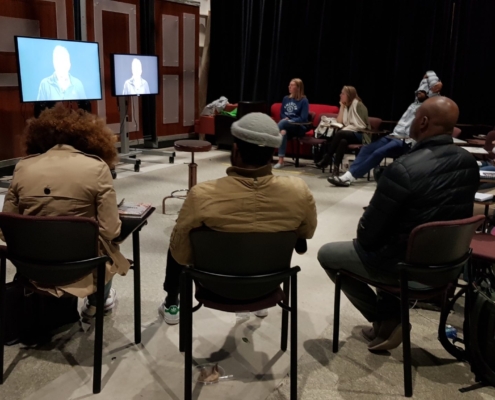